Mechanical Rigging - Details of a Cheat

Nowadays there are few of the brave devisers who would risk in the difficult and dangerous fraud of roulette gambling. But nevertheless they exist and even the innovated security with cameras, video observing of every moves aren't an obstacle for them. They continue doing their affair, and besides, very skillfully. 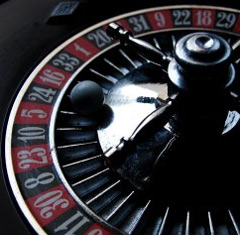 So, from the far time when gambling began to be the legalized toy in the hands of the players, more exactly from 1931, of Nevada origin, there were lots of attempts to hit the jackpot in a cheating way, or to make some revenge to the gambling house because, for instance, it has robbed that player in the time of his heat peak. Everything can happen when you haven't learned how to play roulette. But different devices and performances even then were invented for the sake of casino's rigging just to surprise with its genius and technic. For example, the mechanical rigging at the roulette really astonish everybody even now.

What does the cheater have to do? And how to plan all these mechanical tricks if you are involved in cheating at roulette? Here it is needed a roulette wheel itself, so this kind of cheating at roulette is too sophisticated and intricated but still possible. So, the cheater has to do several of the alterations in its mechanism in order to gain the purpose. The long run of the game can be changed greatly even if you do the smallest modification in the wheel.

But during the gambling history and especially the roulette one, such wheels were found immediately and confiscated at once by the commission authority that has been holding the casino's monitoring till now, so it's quite impossible to lead such an operation. And plus, this is very for the benefit of the casino, because with one sizzle everything can be lost, especially their gaming license.

It's very difficult trick, but the cheaters managed to accomplish it in the following way. So, there are two magnets - one should be install in the roulette table, another - in the surface of ball. But how to make those magnets invisible? There are different forces at such work when the ball must be thrown every time at the wished number. But this was good, because of the less suspicion. Or with magnets the cheaters could invent the other tricks - to put them to the special pockets and in such way the ball will every time come to rest to the magnetized places.

Padding is such a thing during which you can manipulate the roulette wheels even without magnets. This is the best chance for the wheels manufacturers who construct them, and then to come to the casino and hit the gold! This deadening involves the idea of the following: the ball just jumps differently on one or another material. For example, if it is scratched, you have to put there also some wood or slights of metal that the ball could bounce unevenly.

Well, as you see there are thousands of ideas and thanks God there are not so many bold spirits that could realize it. But even the tiny slight of some plastic attached to the wheel can make the greatest outcomes in your life!